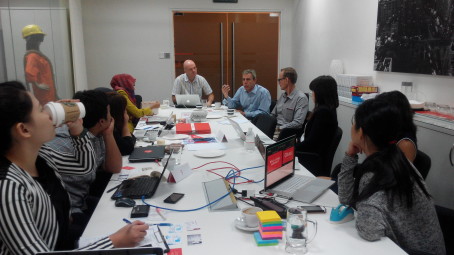 Scandinavian Publishing participated on Wednesday 3 June 2015 in a regional networking event held by Mynewsdesk in Singapore. The event was organised by Julia Tan, Team Leader for Mynewsdesk Asia, and included agents and representatives from Japan, Indonesia, Taiwan, Thailand and Singapore.

The purpose of the event was to provide training, exchange and networking among representatives of Mynewsdesk across Asia at Mynewsdesk Academy, located at NHST Media Group Asia in Singapore.

The day ended with an open networking event including customers and friends of Mynewsdesk at the Canvas nightclub at the ground floor of the River Walk building with direct access to the Clark Quay boardwalk. Here, Julia Tan welcomed everybody before giving the floor to Marketing Manager Shreya Shetty of Hong Bao Media who gave a presentation on the subject: “Video as part of owned media strategy: Why is Video essential in your communications.”